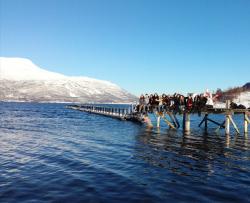 What a nice trip to Lapland!

On the 4th of March 2019, a group of 42 exchange students from all over the world dived into their journey to Levi, Lapland.

First stop on the bus ride to Levi has been the Santa Claus Village in Rovaniemi for visiting Santa Claus and his helpers, the elves. Afterwards, the group headed to Lainio Snow Village, where they got to see magical ice and snow sculptures based on the Game of Thrones series.

The first day of activities started with visiting a reindeer farm, including a sledge ride with those fascinating animals as well as a warming coffee and tea break afterwards. In the later afternoon, people also had the opportunity to go for a snowmobile tour, before heading to a snow shoeing hike down the biggest fell in Levi in the evening.

The next day, the group enjoyed the sunny weather on the cross-country skiing trails in the early morning. Following this athletic activity, huskies were waiting for a rather relaxing, still breathtaking and fast husky ride among the landscape of Sirkka.

Another memorable tour started in Norway, where the students visited Skibotn to see the Arctic Ocean on the last day of their adventure. After heating up in a sauna, people had the opportunity to go for a swim in the ocean, followed by another warming coffee and tea time with campfire.

Besides those adventurous trips, living in really cozy cottages as well as trying reindeer soup for the first time, the group saw the northern lights as bright and big as they never did before.

Thank you KISA and Timetravels to make this adventure one of a lifetime experience!